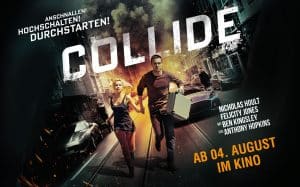 An American hiker (Nicholas Hoult) traveling in Europe, he began working as a courier for a drug cartel. But when a fraud is discovered at a rival gang, he finds himself involved in a chase at high speed on the highway German. Also he must also deal with his girlfriend (Felicity Jones), which is likely to be taken hostage. Two of the most fierce enemies: a strange gangster (Ben Kingsley), and a drug kingpin (Anthony Hopkins).