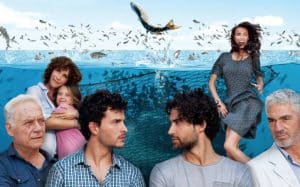 Matthew is a skilled mechanic who dreams of being hired in Maranello, meanwhile, works in his father Italo and lives at home with mom and sister Mariella down, Giulia. Their peaceful life is interrupted by the news of road accident in which he killed a person who belongs to the past Italo. We can not say more to not unravel the many mysteries that lie behind the seemingly peaceful existence of Matthew, but we mention that from now on will start a kind of road movie into a seaside town where he hides the key to the past, and perhaps the future of all the characters in the story.
Alessandro Valori, the director of Radio West and a lovely little short film seen by the public, who is born round, develops here his subject sceneggiandolo with Serena De Angelis, Paula Woods and the actor’s co-star in How to jump the fish, Simone Riccioni: together they build a contrived tale unfolding so gradually and allow the viewer to create gradually the connections between the characters. As if jumping fish contains some tape and ingenuity, values ​​you put a story properly to service that works like a puzzle intended to compose herself entirely alone near the end.
In the bollard of the qualities we have the smoothness of the story, dialogues generally well-written and entertaining, the engaging characters and good performances from all the cast on which stand the veterans Giorgio Colangeli and Biagio Izzo in an unusual dramatic role and young Marianna Di Martino and Paola Maria Rosini, who plays the role of Julia with delicate irony and without patetismi. In bollard defects sprout some phrases that are more proclamations jokes, some redundancy melodramatic, a final rhetorical voice-over and an even more unforgivable scene from “One day in district court” completely out of place compared to the subdued colors held up then, despite all the humorous overtones suitable to lighten a plot otherwise distressing. How jumping fish is a parable about sin and redemption, the need of forgiveness and the human desire to punish himself in a stubborn and obtuse by sacrificing his own humanity to repentance. The film also goes right to the contemporary debate on parenting, asking the question if the children are of who puts them in the world or those who love them and raise them. It has its sweetness, its gentle way of telling the desire to escape from everyone and the need to speculate and contrary, to be brothers, in the broadest sense of the term, but also in the most literal.