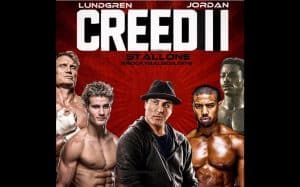 Adonis Creed’s life has become a balance between personal commitments and training for her next big fight: the challenge of her life. Coping with an opponent linked to his family’s past, does nothing but intensify his imminent meeting in the ring. Rocky Balboa is always by his side and, together, Rocky and Adonis are preparing to face a shared past, wondering what it’s worth fighting for and then discovering that nothing is more important than the family. Creed II is a return to basics, discovering what once made you a champion, without forgetting that, wherever you go, you can not escape your past.
Production of the film began in Philadelphia, with Michael B. Jordan and Sylvester Stallone, respectively returning to the roles of Adonis Creed and Rocky Balboa. Creed II is a new chapter in the Rocky saga, and the sequel to the great hit 2015 Creed – Born to Fight, which grossed over $ 170 million at the box office worldwide. Ryan Coogler (Black Panther), who directed the first film, returns to the franchise as an executive producer. The direction of this new film is entrusted to Steven Caple Jr., who directed the acclaimed The Land of 2016.