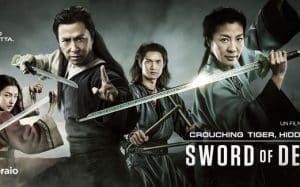 After the death of Master Li Mu Bai in the world of martial arts it has spread chaos, until he prevailed the cruel Hades Dai. When it comes to knowing where the sword of Li Mu Bai, Destiny Green, unleashed a manhunt with no holds barred in order to possess it.
In the fifteen years between the Ang Lee film and its sequel much it has changed in the world of cinema. To the point that Crouching Tiger, winner of four Academy Awards including Best Foreign Language Film, continues to constitute the non-American film that has grossed more in the US territory (as well as a source of inspiration often plundered by other blockbuster wuxia -melò), while the sequel comes out quietly and only on Netflix without print previews (even though they were provided and paid for). A sign of the times and a different mode of use, however, combined with the belated awareness of a successful operation in half.
It was not easy to play or maintain the balance between romance, action and moral ambiguity of the Ang Lee film, and maybe you could take other roads, but the script by John Fusco (The Forbidden Kingdom, the Marco Polo) series looks too all ‘original, reproducing its essential pattern – tormented couple of older players as opposed to the tormented couple of young, characterized by indecision about what is right and what is wrong – but without sapergli breathe the breath of life. The love story between Silent Wolf and Shu Yen is hampered by the apparent lack of chemistry between Michelle Yeoh and Donnie Yen, but it’s not better to the pair of young television faces (Shun comes from Glee) unable to credibly engage.
For long stretches of Crouching Tiger Hidden Dragon: Sword of Destiny nothing happens, but not in the sense of a tarkovskijana contemplation or a rhythm as a coherent auteur cinema with the express language. It will only be a feeling of emptiness, while successive conventional dialogues waiting for the next action scene. And the latter, although behind the camera there is one of the greatest choreographers of martial arts in the history of Hong Kong cinema (Drunken Master, Matrix, Kill Bill, as well as Crouching Tiger, Hidden Dragon Original), only one It proves up to the task and the cast involved fame: the silent and unfortunately very short duel on the frozen lake, conducted between steps “skated” and floating blocks. Too little in a context devoid of meaningfulness epic and narrative pathos, born and developed as a pure reflection of an existing work.
Beyond the controversy that arose in China, does not benefit the linguistic choice to normalize all in English language, which has influenced the casting (apart Yen Yeoh, are almost all American or Australian actors of Chinese origin), and even less the ‘New Zealand’s environment, which provides them with an unpleasant feeling to the County of Peter Jackson. What emerges is a film stateless person, devoid of identity and of a certain country, but hardly destined to leave a mark of his passage.