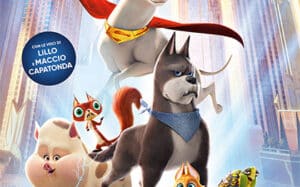 Dwayne Johnson in this animated film with a stellar vocal cast will play Superman’s dog Krypto, who, for the first time, will have a starring role in a feature film.
In DC League of Super-Pets, inseparable best friends Krypto the Super Dog and Superman share the same superpowers and fight crime side-by-side in the city of Metropolis. When Superman and the rest of the Justice League are kidnapped, Krypto must convince an improvised group of pets consisting of Ace the Hound, MP the Puffy Pig, Merton the Turtle and Chip the Squirrel, to manage their newly discovered powers and help him save. superheroes.