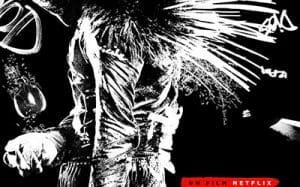 The high school student Light Turner sees a mysterious leather-covered notebook and the inscription “Death Note” falling at his feet from the sky. Inside law that gives the power to kill someone simply by writing his name, even if there are numerous rules. In addition, a creature called Ryuk, which only he can see, encourages him to use the notebook. After eliminating a school bully as a test and telling his secret to the cheerleader Mia, he decides to take out the worst criminals from the world as a kind of deity named Kira. Investigate these crimes and a brilliant asocial detective, who calls himself only L. and hides his face to protect himself from the power of Kira.

I tried to be a hundred percent safe for the original material, but the more I tried, the more the project fell apart. We are in a different territory and we can not sum up a very long series in two hours of film. For me it became then a question about how the issues of comics relate to contemporary America. The game between the cat and the mouse of Light and L, and the good evil and the gray area in between: these are the central elements of Death Note and are those on which we focused.
Adam Wingard

Death Note is the American adaptation of a manga and an extremely successful anime all over the world, written by Tsugumi Ohba and designed by Takeshi Obata, published between 2003 and 2006. In addition to the animated series, novels, games and live action film, so this American is just the latest in many adaptations. Nevertheless, the film was blamed for “whitewashing” due to the almost total absence of Asian actors in the cast, although the story is set in Seattle.