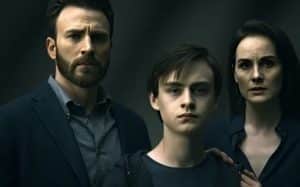 A boy is found dead and his classmates suspect Jacob, Andy’s son, the prosecution’s lawyer who is trying to control the case and manages to hide his son’s knife, which could be the weapon of the crime. When the suspicions about Jacob lead the accusation to proceed, Andy is removed from the case and relies on lawyer Joanna to defend his son. However, his wife Laurie is less and less stressed and begins to doubt her son’s innocence, although there is no really incriminating evidence other than his activity on the web. Andy’s father, a criminal sentenced to many years in prison from which Jacob, according to a dubious theory, could have inherited the “gene of violence”, also sheds light on everything.

In a gray Massachusetts, a procedural battle is fought with many suspicions, a few twists and turns and several bouts of depression. Patinated and with good actors Defending Jacob is on average unattractive, with a surge only in the final black.
The coldness of the plant is the limit exhibited by Defending Jacob, who tells his story by framing it with a testimony from Andy, in a different classroom and with a different procedure, than the one in which Jacob is judged. How did you get there? And why does the accused now look like Andy himself? Is it because of that dagger hidden in the very first episodes? The reality is more complex and will be revealed only at the conclusion of the story, which leads to the extreme consequences of the dissolution of the protagonist family, widely anticipated by the frame with the testimony of Andy. So we are in a process but there is an inescapable fate as in a noir, after all the theme of fate is also explicit in the question of heredity.
That in a 2020 series a theory of crime that seems to come from a Zola novel is taken seriously is quite strange, but fortunately skeptics are not lacking and some “truth” is avoided. In fact, doubt is the engine of everything and the impossibility of dissolving it will have tragic, psychically unsustainable effects. There are those who want to be convinced of guilt and those who want to be convinced of innocence, but the yoke could be silenced only by unequivocal evidence, of which there is no trace. So much so that when a trial seems to arrive, it soon turns out to be a prestigious game, to prepare for a more terrible tragedy.
On paper, everything seems well-crafted and consistent, but eight episodes for what could easily have been a film do not seem justified. In fact, the evolution of the characters is so detailed, in so many small scenes, that it also makes the main shot predictable, with a counterproductive effect. As well as the general climate of dissolution and grayness is as appropriate as it is insistent. This blatant search for mood with the push color correction is certainly not just a problem of Defending Jacob, but of a different recent series, but it would still be time to put a brake on it.