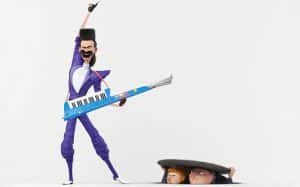 The film tells how to continue the adventures of Crane, Lucy and their three adorable little girls Margo, Edith and Agnes. Always accompanied by sympathetic Minions. This time Gru discovers he has a brother named Dru, identical to him in every way except for a flowing blond hair. The villain of the film will be Balthazar Bratt, a former child prodigy of the Eighties that has lost its way.
A doubling of the villain of this third installment we will Trey Parker (South Park).