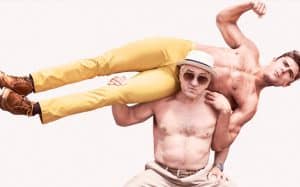 At the funeral of Jason’s grandmother, the grandfather now a widower expressing the last wish of the deceased: a trip to Florida together, grandfather and grandson, stares after years in which their paths have separated. Jason is about to get married and in a hurry to go home, but Grandpa Dick in Serbia a different plan for him, passing from one to celebrate spring break between alcohol rivers.
Original Grandpa unleashed – for once not fire even the impulse to defend the work of the Italian title given to her and an atrocious dubbing – has not even the subject, which essentially corresponds to that of Jackass – Grandfather bad, net of some minimal variation. But compared to Johnny Knoxville and his associates, Dan Mazer and screenwriter John Phillips they have decided to further push on the accelerator of the politically incorrect and ultra-abusive, constituting the most unlikely of duets: Robert De Niro and Zac Efron.
Beyond the suspension of disbelief of effort required to imagine them as grandfather and grandson, the case of miscasting plural is to be remembered in the annals. Efron’s role is that of a child of middle-class father and unable to play, a puppet in the hands of the family, society and future wife who has given up on their dreams. And that story arc, passing through the prison, one spring break and the upcoming wedding will inevitably lead to the disruption of everything. Too bad for Efron means in any case maintain a single, unchangeable, adamantine expression. But if Efron thinks, so to speak, “by subtraction”, which turns away from his role as an actor, the old Bob De Niro of grimaces he pulls too many. Especially having to follow a script that takes him to pick up thirty (or twenty-somethings? Even on personal data anachronisms abound) the day after the funeral of his wife, masturbating watching porn or recite the names of the members of the Wu-Tang Clan smoking cannabis along with a gang.
It is incomprehensible how can Robert De Niro consciously destroy a career in this way, by agreeing to pull over to the likes of Travis Bickle in Taxi Driver or Noodles in Once Upon a Time in America unleashed the grandfather of the film. If it is a situationist gesture or a provocation to Duchamp, is misguided, if it comes to bills to pay is one exceedingly gloomy scenario.
The Phillips script unfortunately not desecrate nor causes. Essentially insults, bad interpreting the word of Judd Apatow, various minorities (gays, blacks, the fairer sex), going so far as to play with a symbol as the swastika to take the Jewish girl game to Jason / Efron should get married right. But especially not funny. Never. Because maybe the rice, also to be ashamed like crazy, that to be clear of certain lines of Christian De Sica (Christmas gag of “portmanteau” in Rio would be a subtlety to the Monty Python in the context of Grandfather unleashed), lead to greater generosity in judgment. But Grandfather unleashed snaps even a guilty smile, lasts only a feeling of unpleasantness reactionary. Complete with a moral message (seriously) about an ex-Green Beret who lives up the patriotic slogan “free the oppressed”, that prevents the grandson of making a mistake by marrying the wrong woman, and “grants” to himself about having sex with a girl 40 years younger.
If it were not totally insignificant and forgettable for the history of cinema also limited to 2016, it would be a highly offensive film. But Grandfather unleashed is not right either grant this privilege, it is more than enough oblivion.