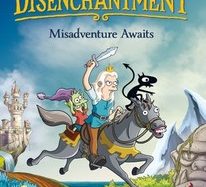 Woodwinds, trumpets and zurli, a folk rhythm that is more reminiscent of the Balkans than Westeros, and then stylized images of hangings, severed heads, thrones bathed in blood, horses and castles of saturated, acidic colors, as if they had emerged from the nightmare of a melnibonean. It is a symbolic welcome, the one that Disencanto gives to its spectators in the initial acronym: leave all hope or you who enter the Dreamland realm, but above all leave aside any expectation of grandiose epic that all the fantasy sagas – more or less explicitly – bring with him. Because here we are in the realm of Matt Groening, father of The Simpsons and Futurama, and taking it seriously would be a mistake.
Distributed by Netflix starting August 17, the first season of Disenchantment starts from a common fantasy place, the wedding of a princess, to systematically destroy, with a nihilistic spirit, any certainty regarding fairy tales (and not only).
Because the protagonist, Princess Bean, has such a rebellious spirit that the Rebel Disney, in comparison, seems more conformist than Cinderella: drinks like a sailor (“A political marriage? I thought I would be married for love, or because I was too drunk “), he plays the poker crown, burps in public, remains topless in front of the guards, commits any atrocity in order to be free to do what he wants in his life. With her two companions, the demon Luci who pushes her to give the worst of herself and a depressed Elf, who finds no place in the world perennially happy (and vaguely tarnished) of his fellow men.
Half an hour per episode, ten episodes in all and a second season already confirmed: “Disenchantment will talk about life and death, love and sex – said Groening – and how to continue laughing in a world full of suffering and idiots “.