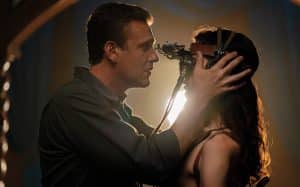 Peter is an employee of a legal music streaming service who can’t find a real meaning to his life. He drags himself day by day, living a routine that is always the same, in which he finds it difficult to find something to cling to in order to feel, if not happy, at least satisfied. The answer to his existential doubts seems to fall head over heels one day seemingly like everyone else, where he comes across the same flyers several times.
Impressed by the anniversary, Peter decides to call the number printed on the sheets: they answer him from the Jejune Institute and invite him to show up at the venue, where he will be the protagonist of an initiation ceremony. However, before this takes place, once he arrives at the Jejune, Peter begins to receive messages from an unspecified “Elsewhere society”, which warns him from the Jejune Institute, pushes him to leave the building and then run away, until to arrive at a store, where he meets a woman named Simone. The two agree to work together and solve the riddles that Elsewhere submits to them: all this seems to make Peter happier, he feels more able to live to the end but this feeling runs out as he returns home after the conclusion of the “mission”, the days begin to pass all the same.
However, the excitement intensifies again when Elsewhere tells Peter to show up to take part in a new game: here, the employee is assigned three new teammates, including Simone. The other two are Janice, a woman in her seventies, and Fredwynn, an intelligent but paranoid man. The group is entrusted with the mission of finding a certain Clara; as they try to come up with an action plan, the four realize that each of them has a very different idea of ​​the true nature of the Elsewhere Society and what lies behind this very intricate “game.”