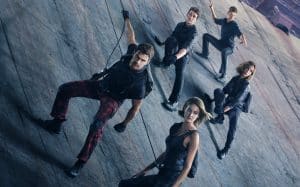 Destroyed the regime that oppressed them Tris and Four are having to face a new order, no less inhuman than the last, prompting them to go beyond the barriers. The world they are, once again it is not the best. They find it to have lived in a bubble, an experiment, constantly keeping an eye on. Theirs was an attempt to bring the human race to its original purity, after too many years of genetic engineering that have contaminated people and poisoned the planet with ruthless wars. Now the Earth is prohibitive place, only a few large technologically advanced centers remain liveable. There the elite tries to return to normal.
Tris and its divergence may be the secret of a return to original purity, she is the chosen one but will have to watch out for as the power want to manipulate it.
Concentrated but without pulp, Allegiant closes the three films in the series began with Divergent and Insurgent continued with, before the arrival of the next Ascendant, turning off any (dim) spark had been lit earlier.
Changing screenwriters again (but the director is Robert Schwentke as in the previous year) Allegiant goes from bland adaptation to bad film per se. Forced by little beginning to abandon the model on which it was traced, or Hunger Games, this final series of reels in a swirl of overly focused events. It happens too much and too fast, without any relaxation, that is, without that step controlled useful to give breath to the events, which instead was the greatest value of the closed Hunger Games. As if to sum up too much in one time too tight, the film does not have the power to make choices and learn from a great story for an equally representative synthesis. Allegiant fact it engulfs several times until the total exhaustion.
If in the first part seems to see a draft of what they were the previous films, from mid-on, the film becomes a miserable production, by serial C, unexplainable for the budgets and the continuation of the series. The design of future environments, the only element that could give personality to the whole, is drastically reduced. If the first chapter had defended himself and the second had pulled the oars, replicating much already seen among the usual customs and the usual design rules, here it turns into psychedelic ideas senseless, a contaminated world all red, with crimson taste of the lowest rainfall.
There is also Allegiant an inexplicable contempt for the dialogues. Of non-confrontation in failure comparison, the film alongside characters that can not explain the other with the only benefit to pursue the ambiguities feeding a too simple plot to be true.
At this point the only detail that seems to carry the weight of an entire film is the lack of confidence in the institutions, the continuous comparison of the protagonists with a power that does not live up to its responsibility and always directed towards the deception and oppression , as if the very nature of the hoax would involve government. Too bad that this is not an original idea, but derived from Hunger Games.
Then the love story between the protagonists is the triumph of the Platonic seems the icing on the cake of one of the most hypocritical film of the year.