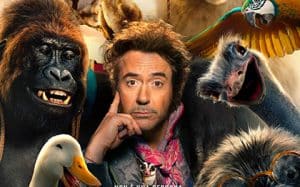 John Dolittle, a prodigious doctor, capable of speaking with animals, lived with many of them and his beloved wife Lily in the reserve of wonders that the Queen of England had offered him as a gift. But a shipwreck has taken Lily forever and since then Dolittle has never wanted to meet her fellow men, has closed the hospital doors and given up everything. Now, however, it is the queen herself, seriously ill, who asks that she return to work, to bring her that flower of the tree of Eden that can only save her.

Traveling on the trail of the tree of Eden obviously means, for John Dolittle, to rediscover the spirit of adventure that had been Lily’s and to make peace with the past to open up to the future. A future represented with good evidence by the co-protagonist of the film, the very young Stubbins, a boy who escaped from a hunter uncle, who does everything to be hired as an assistant by Dolittle and to embark with him towards a well-deserved, and for now postponed, passing of witness .

A century separates the date on which the tales of the magical naturalist were written, in the 1920s, from that in which they are set, namely the Victorian era, with its steampunk and pirate imagery, that Stephen’s film Gaghan brings to the foreground, assuring Dolittle an eccentric and romantic setting, of sure charm.

And almost a century also separates the latter adaptation from the first of a long and varied series, because the doctor who understands the language of animals and knows how to reproduce it is one of the most courted characters from the cinema, Virgil of a mysterious world full of surprises, where you happen to discover polar bears that are always cold, self-esteem gorillas, bisbetic ostriches and wise parrots with the voice of Emma Thompson.

Robert Downey Jr., interpreter and producer, gives his Dolittle a hard zest, a painful heart, a slapstick gesture and a witty genius (a conversation with the octopus of the royal aquarium would be enough). There are, in him and in the film, echoes of Jack Sparrow and his saga, but the gigioneria of the protagonist is mitigated by the nobility of his purposes. Dolittle would like to go back to “the old days”, those in which he was useful, active and passionate, and Gaghan’s film seems to have the same goal: to go back to telling a story of the past, where an orphan may happen to come across the same lady in the company of the queen, where there are secret passages, the stick insect lives on the frame of a painting by Turner, hides in a trunk and rides an ostrich, because the carriage is already occupied by a bear.