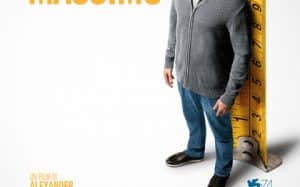 In Norway to all sustainability, a scientist finds the solution to solve the problem of overpopulation: to make human beings smaller. Once miniaturized, humanity will return to being sustainable for the planet. But unlike the first Norwegian colony, thirty-six people who have decided to downsize for the good of the world, those who choose to undergo treatment only dream big in smaller spaces. Paul Safranek, an ordinary man with an ordinary destiny, decides for well-being and a better life with his wife in one of the rich small towns that quickly rise in the States. Converting his debts into wealth and his six-foot to twelve inches, Paul puts his small, great destiny.

Like Jonathan Swift surgeon Lemuel Gulliver, Paul Safranek, Alexander Payne’s failed surgeon, one day awakens in a small world where men never cease to be unpleasant. But unlike the Irish writer, the American director finds greatness even in the extremely small.

It is not that Payne does not see the pettiness of human nature, it is that Payne sees something else and otherwise. Ecosustainable adventure in alternative mobility, Downsizing reconfirms the poetry of the author, marked by a new humanism that favors characters defined by a reassuring and melancholic mediety. Often interested in real people and common stories, neuroses and personal tragedies, Payne impacts the small world of man with the vast world of nature.

At the center of the film, which reproaches the Umbilical gaze to the United States and the lack of foresight and environmental planning, does Matt Damon’s virtuous path, beaten by existential dilemmas: go to the future or remain in the present? Participate in a suggestion or expose yourself to real life? An anti-hero who tries to regain control of events that transcend him. Nonetheless, like the father of George Clooney (Bitter Paradise), Matt Damon’s everyman will end forever with the truth finding at the end of the film a quiet but passionate thoughtfulness.