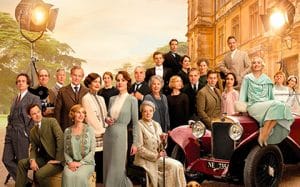 Violet Crowley, Countess of Grantham, receives an unexpected inheritance: a French aristocrat left her a villa by the sea, and Lady Violet in turn decides to turn the property over to her niece Sybbie. The wife of the French count wants to challenge the will of her late husband, but a large part of the Crowley family moves to the Riviera at the invitation of the count’s son, who instead is inclined to respect his father’s will. After all, it is better that only the servants and Lady Mary remain at Downton Abbey, as a film will be shot inside the mansion: and the servants are very excited by the presence of two silent stars, Guy Dexter and Myrna Dalgleish. The director instead will keep company with Mary, whose husband is once again far away.

With Downton Abbey: A new era, the English saga beloved by the world audience closes the circle and at the same time opens the door to a possible new phase, as announced by the title.

It is an opportunity to once again give individual attention to all the characters, and director Simon Curtis and screenwriter William Fellows maintain that magical balance point between sentimentality and irony, tradition and modernity, coherence with the characters that the public knows at mind and ability to innovate their path.

Some narrative lines are particularly moving, and some knots will be dissolved in a completely congruent way with the premises, even those sown by the previous film, as well as by the series. A brilliant idea is to set a movie within the movie in Downton Abbey, which gives rise to a series of jokes about how acting was viewed in an era when actors were buried outside the city walls as a sign of contempt, and opens the door to a subplot which is an explicit homage to Singing in the Rain, and which concerns the inevitable transition of cinema from silent to sound.

The dynamics between the characters are perfectly aligned with what we already know about them, while the French trip visually opens up to a wider horizon, full of air and light, where the well-known interiors of the mansion risked suffocating the story. And the skilful alternation between the two environments is also an opportunity for an ironic confrontation between cultures, hoping that French touchiness does not provoke an offended reaction beyond the Alps!