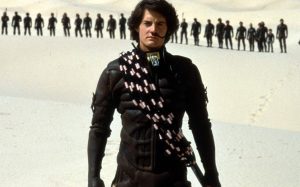 The project for a remake of Dune started in 2008 but only in 2016, when Legendary Pictures acquired the rights and then hired Denis Villeneuve, it finally took off. In short, we are faced with a new, ambitious attempt to transpose the sci-fi epic born from the imagination of the American writer Frank Herbert onto the screen. Villeneuve, now a regular in the sci-fi genre (boasts on his CV Arrival and Blade Runner 2049), and the stellar cast are the two main ingredients of the recipe that aims to return to the cinema the science fiction classic of the 60s, already transposed on screen in 1984 by David Lynch (who at the time obtained mixed opinions and results, both from critics and at the box office).