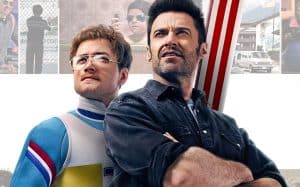 Inspired by the true story of Eddie Edwards, the film tells the ascent of an unusual athlete who wants to achieve his dream of racing for ski jumping and represent Great Britain at the Winter Olympics. In 1973, the little Eddie, despite his physical problems and parents who continually oppose, cultivates the dream of competing in the most prestigious competitions, the Olympics. Growing discovers the jump discipline with skis, a category now abandoned by England, and decided to apply for the qualifications in Germany and represent Great Britain at the Olympics in Calgary in 1988.
Eddie the Eagle is a biopic and a sports movie, but this time the protagonist is an ordinary guy, as we would say today, a nerd who becomes a hero, overcoming an almost impossible challenge, driven by his strong will and a coach outside the patterns: the former champion Chuck Berghorn (Hugh Jackman). Chuck is the antithesis of Eddie (Taron Egerton), is a hedonist, a bon vivant who just wakes attaches to the bottle, but as Eddie had a big dream, then finished because of his being a little boy disciplined. Between Eddie and Chuck will be established a great friendship and respect, typical between the student and his teacher. Eddie will try to overcome the impossible challenge, Chuck finds himself himself retracing a path that years earlier had brought him success.
Dexter Fletcher movie does not come out of the box of conventional biography but can be fun and entertaining; the protagonist is a man who blindly believe in something, while being aware of their weaknesses, do not throw down leaves from the teasing of the other athletes or 90 meters of the trampoline, Eddie continues stubborn on his way and this will allow him to become a legend. Eddie the Eagle is the climb and leap towards a dream, albeit with some limit and the succession of more or less predictable actions, gives the viewer a rematch lesson a guy driven by an inner strength. Small bit part for the great Christopher Walken in the role of former coach Chuck.