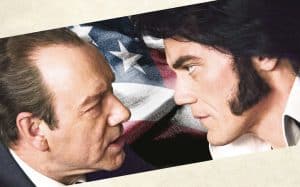 Elvis Presley has a dream: to be a federal agent named by President Richard Nixon. In the early seventies America is in anguish. Demonstrations against the war in Vietnam, claims the Black Panthers, the debut Hippie movement and degradation of morals require immediate and heroic action. Determined to be the local hero that he puts order in social disorder, Elvis asks for an interview at the White House. But President Nixon snubs rock star, which would leave willingly to the door without the intervention of the daughter, fierce fan of Presley, and his advisers believe that providential that in the light of the upcoming elections. Received in the Oval Office, Elvis gets the investiture in exchange for an autograph and a photograph that immortalizes the famous meeting.
Head to head and comedian twilight between a president and an idol, Elvis & Nixon puts in screen meeting unlikely but true between Elvis Presley and Richard Nixon. Attested by a photo, the famous but little documented confrontation took place in December 1970, when Nixon was trying by all means appeal and voters and Presley was reached and surpassed the vague of 68. Surprised by Liza Johnson in full transition, as between the back successful, “Suspicious Minds” and its transformation into a fairground attraction, supplanted by a new generation of British rockers who despised, Elvis is played by Michael Shannon, who builds a portrait of a complex and grotesque conscious singer of myth that had become . In front of him, the president of Kevin Spacey, who lives still the Oval Office and short-circuits Underwood and Nixon (House of Cards) in a space-fictional gap, making the second a great comic character.
Meditation on the decadence of an idol and set farce about power, Elvis & Nixon is a film of actors, a surreal parentheses reflects the manner in which Elvis resonates with his time and inevitably with ours. In 1970 Elvis is still not the bloated whale is stranded on the stages of Las Vegas but it is no longer even the suave singer who revolutionized popular music seventeen years earlier. The best artist has already passed and the worst is waiting around the corner. Elvis died seven years later obese and defeated in his bathroom at Graceland. In this gap slips Michael Shannon embodying soberly what was left of a myth, its precipitate on the bottom: a Southern white, obsessed with weapons, from the American flag and the redundant sequined costumes. Shannon is the ideal distance between himself and the character, looking and finding an Elvis Elvis. Because the actor does not want to look like him, the artist recreates a track, an aura, a movement. Through an inventive construction and the register of comedy, Johnson meets the US most conservative president with a rebellious musician in search of a distinctive undercover to defend a nation threatened at all levels.
Threatened (especially) in the wasp supremacy, of which Elvis does avid wearer, stuffed simplistic ideas about the world, disconnected reality and so used to getting what he wants to no longer hear the ridiculous threshold. With ill-concealed jealousy for the Beatles and the Rolling Stones, won the White House without sing a note, such as Liza Johnson chamber comedy (oval) that does not ‘mean’ sing. Because Elvis & Nixon faces the beginning of the end of Presley, who does not spare shots, quips and jokes.
Etched with his myth, the film describes a man spoiled by celebrities, which is normal to be called ‘boss’ by his childhood friends. More transvestite who dress, Elvis Presley is a prisoner, a tragic hero before whom even Nixon eventually give in. Liza Johnson opens the door to the Oval Office, recalls their ghosts and keeps them, for better or for worse, make history. An American story.