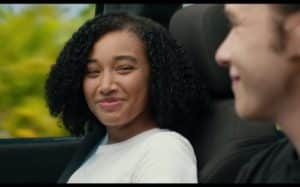 Madeline is a teenager who has been practically a prisoner of her home for 17 years as suffering from a rare disease that has reduced her immune defenses to a minimum. One day a moving truck arrives in its street and Madeline, from the closed window, sees for the first time Olly, the new neighbor. Their looks cross each other. Thus begins a love story that will have to overcome obstacles that seem insurmountable.
There were all the premises to make a good movie. Nicola Yoon’s novel has been at the top of sales charts in the US for over a year and the book is being published in 38 countries.

For the main roles were chosen the most young Amandla Stenberg (many will remember her in the role of Rue in Hunger Games) and at his side that Nick Robinson soon became one of the most loved actors by teenagers and young adults.

Then there was the theme of serious illness at a young age that had achieved a remarkable international success with Colpa delle stelle (repeated in Italian cinema by Bianca as the milk, red as blood) To this were added good expectations on the direction of the Canadian Star Meghie in the transition from independent cinema to a Hollywood production, without prejudice to the interest that all these elements may provoke in the relevant public (the US box office is there to testify), it must be said that the film is disappointing. who has read the book will be different, because prepared for developments, but the twist that, at a certain point, raises the same effect as a bomb that explodes off without anyone around. It is as if it worked on paper ( would not explain otherwise the publishing success) had been thwarted by the words spoken and no longer written or, however, by the script by J.Mills Goodlo Why can we also take refuge behind the definition of ‘fairy tale for youngsters’ but there are limits that even fairy tales are not allowed to overcome. For example, Madeline’s swimming habits are totally inexplicable for a girl who has lived in infancy and adolescence. At one point Olly expresses his admiration for the girl who ‘without knowing how to swim was thrown from a cliff’. At the end of the vision we get the impression that Nicola Yoon has trusted a little too much of the Meghie / Goodloe couple, who transfer his novel on the screen, throwing him from the cliff without providing him with an adequate life jacket.