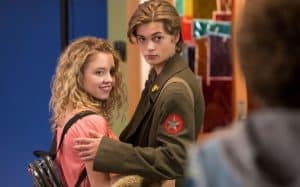 Once upon a time there was a world where you had to wait a few minutes to connect to the internet. Patient waiting moments spent listening to the contraction of entire nebulous data, processed laboriously by modems installed on Windows 95 operating system. A world without smartphones, without tablets, without talent on TV. The pop music was that of the instant bands – Take That and Spice Girl to counter the Britney Spears phenomenon – and there were no YouTube views to decide who had the best in the clash between titans Oasis vs Blur.
That world was the nineties, recently returned to the collective imagination with the same devastating vintage-nostalgia effect already touched in the eighties.
Cinema is reminiscent of them, with sequels or remakes of films that marked the decade (It, Jurassic Park and Trainspotting), reflects the literature (Magic Nights: nineties sentimental atlas by Enrico Buonanno and Luca Mastrantonio), generalist tv (Ninety Special), Italian fiction (1992, 1993), the masters return (Twin Peaks – The Return), videogames (the special editions of Monkey Island) and cartoons (Duck Tales). And to crown the great return of the decade of the Swatch, the cd and the modem also comes Netflix, which – after returning the lights and shadows of the eighties with series like Stranger Things or Dark – from February 16 operates the time machine to bring us back 1996, with the ten installments of Everything Sucks!