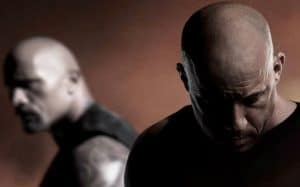 Film racing is a definition that goes a bit ‘close to the saga Fast & Furious. Although the machines are always there and everything, even what they would be more comfortable to walk, is done sitting at the wheel, the saga is not a thriller set in the world of illegal street racing, but has expanded its size up to play in a league of his own.
Three films with no real theme and then, from the fourth onwards, a more recognizable structure and a more careful planning, Fast & Furious has taken shape as the saga while cinema was changing and it is appropriate in the running. It started with the classic sequel to expand and become a franchise, that is a small universe in which the characters’ adventures are constant tone, look and rhythm, regardless of the director. As a television series from the astronomical cost.
Yet, despite their sovrapresenza, fewer and fewer are the machines to count, more and more are a decorative element useful to “recognize” the series immediately. The philosophy of the outlaws car driver becomes one of the largest international crime, with an ambivalent relationship to the law, that from chapter to chapter ended up being just as “powerful”, muscled and exaggerated as criminals with the addition of Dwayne Johnson.
And as a successful party to which everyone wants to participate, the saga has begun to attract more and more players, adding in each chapter a new face among the villain (ready to go out the window at the end of the chapter and return the door on the side of good), creating a meta-cinematic concept of family.
The “familia” Dominic Toretto, has an extended family that includes associates and allies, friends and enemies become friends. All those who work with Dominic become familia, enter the clan, participate in barbecue end film and have ensured the protection in the next film. Between Goodfellas and The House on the Prairie, la familia is a concept that extends to become extrafilmico, as demonstrated by the death of Paul Walker. Member of the series from the first chapter, had linked his name indissolubly to the franchise and his departure was planted not only in the real world but also in that of fiction, with a final in computer graphics of the last movie, which suggests’ ascent to heaven by car (from white race).
La familia is the productive world of Fast & Furious, which becomes the world of fiction, beyond the concept of the extended family as we know it in the real world, and eventually include a star cast that adhere to participate in a film and adhere to a wide project.
It is no coincidence that the new chapter, from whose trailer shows that Dominic Toretto, the capofamilia, has betrayed all of allying with a computer terrorist (Charlize Theron, the new addition of weight), to be in danger is not so much the lives of the individual as the unit of the familia. The unexplained about-face leaves everyone dismayed and as in a melodrama, or rather like a soap classic work, suggests that there is something bigger behind that Toretto is forced or has a bigger plan that could not reveal. Blackmail, secret plans warps behind all plots and subterfuge, it is the “family” melodrama. Fast & Furious 8 then, he promises to play very well with the exaggerated feelings and projecting, in full continuity with the hyperbolic rise in recent years seems to have secured a place of honor in the Asian box office.
Hollywood has realized that if he wants to win the hearts of the whole world (not only Western) has to work at a lower, instinctive level, put a company on the scene slightly less evolved in terms of gender equality (Jurassic World is emblematic), characters defined more clearly (every member of the familia has a specific function) and interactions emotionally coarse and expressionist. This should be coupled with a level of performance superior to that which the American cinema had accustomed us and closer to film standards in Hong Kong and (now) Chinese. Auto dragging safes around Rio, car smashing the window of a skyscraper and enter the adjoining building, car fleeing a plane explodes and cars (the new film) escape on the ice by the emergence of a submarine that chases. All really done in the human limitations, with as little computer graphics is possible.
Explosions exaggerated side by side with screams, tears, betrayals, revelations and sensational return from the dead, the whole repertoire more naive that Western cinema seemed to have left behind comeback to please the worldwide audience. So, after the return of Michelle Rodriguez, the erased memory problems and then recovered and the sensational dead, now it’s up to the turnaround of the most integrity of the familia members. The unshakable security seems to have given up all the face of the law, Dwayne Johnson, ended up in jail, him (but there will meet an old villain ready to pass on the good side).
You understand so only now yet another spill metacinematografica Series, or the phony war of statements between Vin Diesel and Dwayne Johnson exploded a few months ago. The first gave the “softened” the second (which is such an insult only in the world of Fast & Furious), by starting a feud public relations now (if you were needed) takes on a greater meaning and will be concluded a duel of a wrestling ring, a triumph of true that you fake, where presidential candidates and actors demonstrate their true power, in a mock fight.
Because the familia, and his feelings in the idea of ​​Fast & Furious do not stop in the movie but want to give the illusion of being a spectacular representation of what really exists.