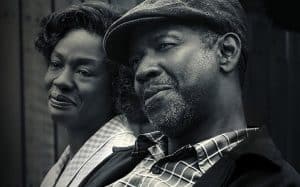 Troy Maxson in the Pittsburgh Nightmare in the 1950s fights daily against social injustices and inner demons. Unmoved and cuddly spirit, he has a wife, a lover, an inseparable friend, and two children he does not approve vocations. Lyons plays jazz and Troy sings the blues, Cory practice football and Troy plays baseball. Closed in the fence he is building for Rose and in what he has raised in his heart, Troy is a relentless wave that frustrates his affections. Noting the younger son, whose wings are to be protected from racial discrimination, and persuaded by his friend to make a decision on his (double) life, confess to his wife betrayal and open a gap of grief to each other. Remained alone in the backyard of his discontent, Troy recovers existential shakes and waits for death.
In his third direction and consistent with a filmography adhering to a social group, a political consciousness, a story, a territory and an artistic form (Antwone Fisher, The Great Debaters), Denzel Washington makes Barriers, Adaptation of Auguste Wilson’s pièce.
Taken from “The Pittsburgh Cycle”, a collection of ten dramas on the need for social emancipation of the African American community, Barriers like blues leaves the word to a minority. Minority to which the protagonist belongs, in a permanent conflict with life and the search for a social identity. In the manner of the original work, Washington’s transposition has a universal reach but infused by an explicit African-American cultural brand, the blues. The blues adheres to the stage of August Wilson as a plot that allows to establish a thread between the different drama of the cycle. Ten stories of ten songs that play the role of spiritual guide and accompany the characters in their often painful research of recognition.
“Blue” is the song by Troy, inherited by her angry and violent father, and is transmitted to her son and daughter singing together in the epilogue, giving the parent’s memory and recognizing the fraternal bond in the same ‘good’. If Raynell is a singing song, Cory is a gesture of forgiveness that allows him to make peace with his father and advance in life. Primary reading key to venture into drama, the “Blue” tune in with the actor undo the distance between monologue and solo. The blues, indissociable from Wilson’s theater, is Troy’s last resort to be understood by his sons and daughters, a Greek chorus that replicates and admonishes his incontinence. Incontinence verbal that manipulates and encapsulates a courtyard gradually emptied and reduced to the viewers alone, which Denzel Washington faces in the room.