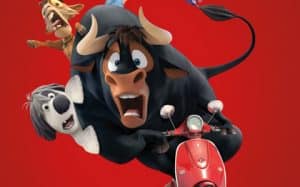 Ferdinando is a magnificent bull who loves flowers and hates fighting. He grew up in a bullfighter breeding mas and he is the only one of the guests who does not want to die in the arena, perhaps because he has seen his father leave and never come back, and something suggests that they are not always to triumph against the matador. So he escaped from Torellino and was welcomed by Nina, a girl whose father raises flowers: it is a paradise for Ferdinand, but when he grows up, a misunderstanding will take him back to the competition road. Will the good giant succeed in affirming his own peaceful nature?
Ferdinand is the film version of the Disney short Ferdinand the Bull, winner in 1938 of an Oscar for the subject, in turn based on The story of the bull Ferdinand of Munro Leaf of 1936.
The director is Brazilian Brazilian Brazilian Carlos Saldanha, former coregist of L’Era glaciale, and unique author of Rio and Rio 2 and Ice Age 2 and 3. Saldanha remains faithful to the original story and a certain bucolic naiveté dictated by the central character of the gentle bull, but adds some characteristic features of his cinema: irony, physical comedy, the ability to incorporate elements of current pop (in one of the hilarious dance scenes there are those who do twerking and who mimes the Dab of Pogba) , the speed of action scenes, and a certain taste that keeps the narrative a hair on this side of the ethnic stereotype (in this case Hispanic) while giving it a local color.
The plot focuses on a theme very frequented by the cinema of recent animation, that is to follow their own nature regardless of what others think, and also has a strong pacifist message (as well as animal rights: the bullfight is portrayed here as barbarism in disguise traditionally, the slaughterhouse as the nightmare of cattle), but Saldhana remembers above all to entertain, and creates a gallery of comic characters among which stand the Lupe goat, three porcupines that seem out of Mission: Impossible and three horses absolutely demented. The irony of the authors is also evident in the choice of the American dubber of Ferdinand, the wrestling champion John Cena. Even the way they deal with very sensitive subjects, such as the death of a father and the fate of the beasts of slaughter, manages to be polite without denying the reality of the facts.