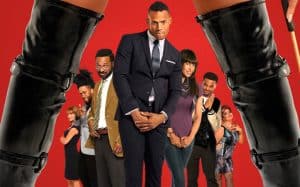 Christian Black is a color enriched entrepreneur with drug trafficking. Hannah Steele an English literature student who earns a living as a clerk in a hardware store. When a friend asks you to replace it in the interview to the young manager, the two meet and I was born soon a sexual-love engagement involving clumsy sadistic practices in a contracted relationship between ruler and subject.
The idea, on paper, could be successful. Take one of the publishing and film the most successful cases in recent years, lead to caricature the clichés of an already parodic erotic subject of his own, to cast two Afro-American performers to entrust the part of the protagonists and build on to add a healthy dose of social satire. The title is apt: Fifty Shades of Black, ‘Fifty Shades Darker’, which in Italy becomes ‘smearing’ in order not to confuse it with the sequel of the saga that the original sounds instead Fifty Shades Darker, exemplary damages domino effect produced by titling our local. An operation that would have worked if the gray matter, in fact, had been that of ZAZ or others who, like Jim Abrahams and the Zucker brothers, made the fortune passed-demented parody of the genre. Unlike the case where the signature is Mike Tiddes, assisted again by Marlon Wayans in front of and beyond the camera as machine screenwriter-producer along with Rick Alvarez, the same people who gave us the one-two of Ghost Movie, a name of a program.
If the remake follows all too closely the staging of the film by Sam Taylor-Johnson – allowing himself just a couple of digressions in the form of flashbacks – the story becomes easy pretext to carry out a withered comedy. With the paradox that the film part from the stereotypes of a soap opera castrated to art for the general public to arrive again to those of a size, so did the comic-movie, worn for years, creating a short circuit in which the viewer is forced to watch without to take part. While the issue of race fails the color rendering, as the title suggests, amazed as being neglected while rich vein of sexism that runs through the first chapter of the trilogy written by E. L. James. The gags are predictable in the best case: the tour by private helicopter between the skyscrapers of Seattle is switched to a much more modest ride on a bus, while a games room becomes of course, as suggested by the dramatic model, the place where become intimate with gamepad and consoles. But despite the digs at Republicans Donald Trump and winks to the most recent movies (from Whiplash Magic Mike), that of Mike Tiddes and comrades remains a provincial product as proudly anachronistic.