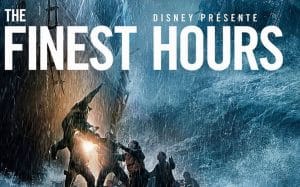 The Disney film tells the heroic feat of the US Coast Guard in the throes of a violent storm and one of the most disastrous shipwrecks of all time occurred off the East Coast.
The February 18, 1952, a terrible storm hits New England, devastating entire cities on the east coast and devastating the boats which unfortunately are in its path. Among these, the SS Pendleton, a T-2 tanker live in Boston, is literally split in two: the 30 sailors trapped in the stern are intended to rapid sinking. The first officer on board Ray Sybert (Casey Affleck) is aware of having to deal with the emergency: urges men to put aside their differences and work together to get them through one of the worst storms that ever pulled down the East Coast.
Meanwhile, the news of the disaster reached the Coast Guard of Chatham, Massachusetts. The Sergeant Major Daniel Cluff (Eric Bana) gives the order to carry out a risky operation to rescue the shipwrecked: four men led by Captain Bernie Webber (Chris Pine), boarding a lifeboat from the faulty engine, almost devoid of real means of navigation, against 18 meter waves, whipping winds and freezing temperatures.