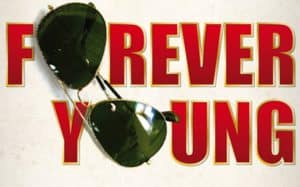 Giorgio is an almost fifty with a girlfriend who could be his daughter. Diego is a fifty old dj, dependent Giorgio, which must make way to a strong of its millions of “Millennials like.” Angela is a 48 year old divorcee, a little ‘surprise, he finds himself involved in a relationship with a 19 year-old, before discovering that the boy is the son of her friend always cougar chasing toy boy. Franco finally is a sixty who practices all sports obsessively, in perpetual race against time passing. The common trait is clearly to master, and the dominant feature of these baby boomers around the half-century is their refusal to come to terms with age. There are even fifties at peace with themselves, as Stefania, the physiotherapist of which George falls in love, but to prevail is the lust for eternal youth announced by the title.
Fausto Brizzi returns to directing to address, also a screenwriter (with Marco Martani and Edoardo Falcone), one of the hottest issues of the contemporary world, especially in Italy that does not off to the young, but at the same time is ready to scrap those a few gray hairs. In part Brizzi hits the target, partly lose the opportunity to shoot a really important film: what makes the difference is negative tendency to prettify the most painful aspects, dodging the bitterness and fear that instead are intrinsic ( and essential) to the subject. Where unknown Perfetti revolted again and again the knife, even for comic effect, Forever Young takes a step back, avoid sinking the blade as if “should seem bad” and it should remain faithful to an aesthetic in which paratelevisiva the extras are all attractive, the product of the sponsor should be placed at all costs, the music is a ball, there are no words spoken in a whisper (or remained steady in the strangling), artists are absolute zero, and Rome is a giant penthouse view. There is a difference between a critical reading, or a social satire, and a representation that somehow glorifies what it questions, content to smile rather than laugh bitter.
The most compelling story, also because it is one that has a non-trivial epilogue, and why has the courage Bentivoglio (actor) to make himself consciously ridiculous, is starring George. The most fun, because it dares the strings of the grotesque, is the parable of Diego, who can count on the comic vis Lillo and the support of at least a remarkable cameo to Nino Frassica in the shoes of a prelate used as a measure of compatibility Diego with religious radio station. The best lines play on the contrast between vintage and postmodern: “Where you find the time to make pasta by hand?” “I do not have Facebook”. And for some time he did not feel so delicate and evocative sexual allusion (for those born before the cd) as: “How long have not you put the needle on vinyl?”. But if to illustrate the contrast was that between “the new advances against old man who does not give up,” the language of the story should have been less “old”, and the space for the new – in terms of creative solutions and courage in ‘be uncomfortable and unpleasant – wider.