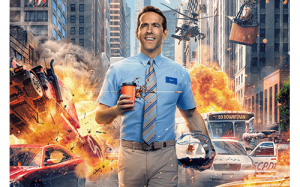 Guy is a bank operator like many others who earns a living in a city where armed robberies, spectacular explosions, gunfights and any kind and type of urban guerrilla are on the agenda. The reason is that Guy lives inside a video game – Free City – and is a non-playing character, a video game jargon PNG, immersed in a brutal, violent and out of control open world. Which also goes very well until Milly and Keys, two programmers, invent a code that allows him to become aware of himself and develop a clear decision-making autonomy: the code is inserted into the game by Antoine, the publisher of the product, and thus Guy wakes up and opts to become “the good guy” of the situation, the positive hero who will put an end to this infinite tran-tran of violence, crime and chaos.
«Free Guy – Hero for fun is a mix between GTA and The Truman Show and I think I have found one of the greatest musical challenges of my career»
Christophe Beck, composer and author of the soundtrack
At the orders of director Shawn Levy – again behind the camera for the cinema after the experience as producer and director of some episodes for the three seasons of Stranger Things – there is above all Ryan Reynolds, grappling with a role that seems done tailored for him, which mixes a large action component with many comic situations and gags and in which all the talent of the Canadian actor can emerge.
Guy is none other than a hero by chance, naive to the limits of stupidity, but at the same time also irresistible because of his candor and his self-sacrifice towards the cause he has chosen to follow.
The cast is completed by the English actress Jodie Comer, the character Joe Keery, Lil Rel Howery, Utkarsh Ambudkar, the supermodel Camille Kostek and Taika Waititi, who has always been active as an actor but became more known as a director thanks to Thor: Ragnarok.