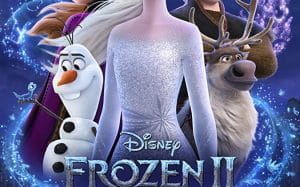 Now that Arendelle and her family live in harmony, Elsa would not want to disturb the peace of both for any reason, but she hears a voice, which no one else hears, that shows her fragments of her past and promises her answers about her identity. To follow this call and find an explanation of her powers, she decides to travel through the enchanted forest of which her father spoke to her, although this means having to dominate the spirits of Air, Water, Fire and Earth. Anna follows her, determined to protect her sister, and of course Kristoff, Sven and Olaf join the company.

The high expectations that have surrounded the announced sequel of the adventures of Elsa and Anna for years, the most dismountable snowman in the world, the romantic Kristoff and his unsurpassed reindeer, must resound in the ears of Disney creatives like the voice that keeps you awake Elsa at night: spur and torment.

After a long wait, it is now finally possible to return to the magical world of ice creations, of the wise and tumbling trolls, of the love between sisters, stronger than any other, but the performance anxiety has sown some uncertainty, the demands of the marketers can be traced with the naked eye, the luck of the songs of the first film pushed this second strongly towards the musical (among other things, one of the most likely transmedia derivatives).

Going to the origin of magic, and its motivations, the mystery has been lost in the street, in favor of a more predictable story, but no less exciting and adventurous. The humor is still there, in Elsa’s irresistible annoyance for the notes of the song that made her an icon, or in Olaf’s gesticulated summary of the entire previous film episode, but in general the growth of the protagonists imposes and it maintains a more dramatic tone, in which listening to Nature plays a central role, the reparation of the wrongs inflicted on it and the acceptance of its power, unnecessarily and erroneously denied by man.