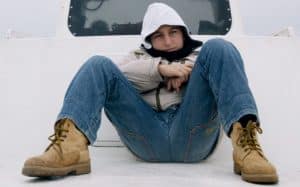 Gianfranco Rosi tells Lampedusa through the story of Sam, a boy who goes to school, likes to throw stones with a slingshot who has built and go bird hunting. He prefers to play on the mainland even if everything around him, speaking of the sea and the thousands of women, men and children that sea, over the last twenty years, they tried to cross it in search of a life worthy of the name often finding in too often, death.
To fully understand a Gianfranco Rosi film is primarily essential to get rid of a mental superstructure to which many have ended up joining passively and in an almost unconscious and pain-free. It is the journalistic investigation television format that takes the form of shocking images, more or less interesting interviews aimed at a plant (in particular on the issue of migration) ideologically prepackaged. Either you are for or against it is taking charge of the problem and on this basis we build the narrative.
Rosi, such as Salgado that we have known thanks to the salt of the earth directed by Wim Wenders, departs sharply from that described above from the choice, fundamental, to abhor the so-called documentary ‘hit and and run’ that sees the crew arrive at the place, expect to understand quickly or at least tidying their own prejudices and start over when she thinks of ‘enough material’. The director has remained for a year in Lampedusa entering so really in the rhythms of a microcosm in which he wanted to make an absolutely honest testimony.
Samuel is a young boy with the apparent safety and the fears and the need to understand and know typical of every preteen. With him and his family we enter into the everyday lives of those living in a place that is convenient for definition, constantly in an emergency. Thanks to him and to his ‘lazy eye’, which needs rehabilitation to take advantage to see its full potential, we are reminded of how few diopters is equipped with the look of a Europe unable to address the phenomenon of migration unless with the optics of a Fagin Dickensian which opens or closes the borders according to their own advantage. Samuel never met migrants. To do so is rather Dr. Bartolo, one of Lampedusa doctor forced from his job consatatare deaths but that can not transform everything, for decades, in a macabre routine, keeping intact an indelible sense of participation. Rosi never look for the low blow, even when he shows us situations to the limit. His room framing life and death without any aesthetic pleasure but with the knowledge that, as recalled Thomas Merton, no man is an island, no island, today, is like Lampedusa.