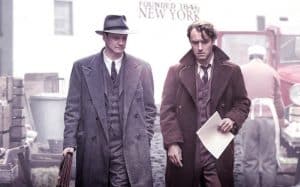 New York, late twenties. Max Perkins is the main editor of the publishing house Scribner’s Son and has already contributed to the discovery of writers of the caliber of Francis Scott Fitzgerald and Ernest Hemingway. On 2 January 1929 the first meeting with Thomas Wolfe, who has submitted a manuscript of a thousand pages titled “O Lost”. Perkins read it in one breath and the certainty of having before him an author who deserves the literary success. It is across from a man who needs support and difficult character.
Based on the biography “Max Perkins. Editor of Genius”, the Michael Grandage film differs appreciably from classical biopic. Because it is true that leaves ample space to the description of a Wolfe everything genius and recklessness, unable to have links that are not with the fruits of their creativity but at the same time in need of finding a substitute for the father figure he had counted so much in supporting his studies and who had died prematurely. But it is also true that the major focus lies on Perkins, a man who took off his hat at the table and even that once attracted by a text, ended with disinterested in what was happening around. Grandage reminds us that, now as then, a great novel is never the result solely of the creativity of ‘a’ genius. It is important that beside him there is another, hidden but equally necessary: ​​the publishing editor. If it’s a person who loves his work, which is not limited to correct typos but can enter into the intimacy of a text, knowing how to seize the potential but also highlighting the fragility, the book that is born will be better than when It has been submitted for publication. Through meeting (and sometimes the clash) between two such different personalities we are invited to understand how the power of the word remains even today, nearly a century later, and in a world in which forms of communication seem to have taken the streets totally different, fundamental. Hemingway, the Scott Fitzgerald, Wolfe propose the words that we still retain a sense thanks to the work, obscure but crucial, of Perkins.