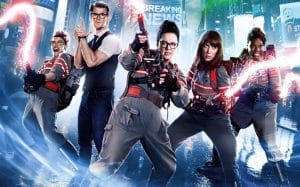 The ghosts exist and strangely are beginning to attack men in New York. The only ones who can stop them are the scientists Abby Yates and Erin Gilbert. The first studies on chasing ghosts unsuccessfully for so long that it is now considered a charlatan even the most ridiculous universities, while the latter has renounced his past and her friend for a more regular academic work and shared. The appearance of ghosts throws, willy-nilly, in action. Combining theory and practice, they build real weapons to fight with ectoplasm and then, complete with a suit, start directly in the hunt along with two other outcasts: the engineer Jillian Holtzmann and the attendant Metro Patty Tolan. They will also add a beautiful and stupid secretary, useful to put in motion the business, also forced to take the field when the threat will be very serious.
There is a kinship not common between the desire of Paul Feig and the team with which he has achieved success, formed mainly by Katie Dippold, Melissa McCarthy and Kristen Wiig (Bridesmaids, The Heat, Spy) to project the light comedy of new players, and the search for dignity for women scientists to Ghostbusters. It is the same relationship that comedians escapees from the television show Saturday Night Live felt the original storyline in 1984. If Dan Aykroyd, Bill Murray and Harold Ramis (under the direction of Ivan Reitman) threw a new and different light on comedy from a fusion not common among adventure and comedy, now Feig and her girls want to do the same. The difference is not just that women scientists with backpacks proton today not really looking for an adventure but aimed more directly to legitimize themselves.
The Ghostbusters of 2016 is in fact a story of personal achievement where the original one was an epic parable of intellectuals (some more than others) and losers ousted from everything, even from the university world, turned into action heroes from their tenacity. The female version of a classic 80s, then takes the treatment of inspiration, it specifically follows several steps to make sure you never go off topic and remain recognizable for those who remember the original, yet it folds the spirit in search of a women’s fiction.
Paul Feig and Katie Dippold certainly know how to bring out the comic component of their actresses. The two just do not find it very funny gags but wriggle free from the legacy of humorous world as we had conceived Dan Aykroyd and Harold Ramis, to carve out a stroke style and personal tone of humor. The other side of the coin, however, is a total put on the edge of action and adventure, treated both in the script that especially being directed with a certain annoying indifference and with the trivial naivitè of who has the kind practiced only in parodies. At the heart of this time there is the trust and unity that it creates in the team.
The Ghostbusters of 2016 do not really trust each other like their male equivalents in 1984, their main problem is not ectoplasm around the city (a threat never really frightening, never really serious), but the respect of those around them, of society as their own. Maybe that’s why in the film defeat the greatest threat (this time a lot of men here on earth rather than deistic as remembered) has a narrative weight and scenic secondary to the defeat of the walls that women have erected towards each other, and especially the two protagonists, once associates and then divided by the fear of external judgment.
Remake such only in appearances, in cars, in suits and in the music, but in a fundamentally different reality, this Ghostbusters aims precisely to tell more than the original, delete the epic and looks the same story with other eyes to find all the ‘ insecurity that society instills in certain human categories. The best part of the film is in fact when it cuts all ties, even aesthetic, with the past to tell the loneliness and fears of women who have embarked on a career that traditionally do not belong to him: the one from Ghostbusters and that by comedienne.