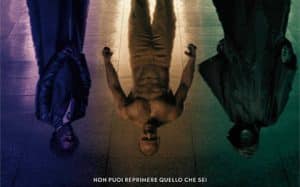 David Dunn, a middle-aged man who turned out to be almost invulnerable, is destined to cross his own destiny with that of Kevin Wendell, suffering from an extreme form of schizophrenia for which he has 24 different personalities. The last of these is The Beast, which causes him a mutation making it a sort of super-cannibal. The only one who knows of the existence of the Beast is Casey Cooke, who escaped him and is now on the run, but even more crucial is the figure of Elijah Price, that is “the glass man”, who keeps secrets about Dunn and Wendell and he will manipulate them for his purposes.

It’s a sort of superhero movie, I definitely consider it this way, but it’s also very different from the others. It will not look like Marvel movies.
Jason Blum
Glass is produced again by Jason Blum, the main architect of the regeneration of M. Night Shyamalan after the series of flops from Lady in the Water to The Last Air Dominant and After Earth. Blum, a small budget horror-thriller champion, emerged with the resounding case of Paranormal Activity and still on the crest of the wave thanks to Scappa – Get Out. He was the one who trusted Shyamalan and allowed him to find himself in a cinema more limited in means, but strong in ideas, first with The Visit and then with Split. Right from Split, Glass is the sequel – and this is the first sequel in the director’s career. The final of the previous film had, however, introduced an unexpected element: the character of David Dunn, the protagonist of Unbreakable, that Shyamalan had directed in 2000. Glass in fact refers from the title to Mr. Glass that is “the man of glass”, that was Dunn’s nemesis in Unbreakable. The film is therefore the unusual case of a sequel to two other films that are very distant in time, which now make up a shared universe. But Shyamalan does not intend to betray the lesson learned with Jason Blum and in fact this Glass will be made with the rigor of limited means of production, despite the success of both Split and Unbreakable.