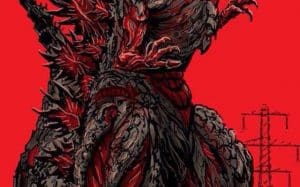 After a break of twelve years, the Toho produced a new film about Godzilla, thanks to the revival of the franchise obtained after the success of Godzilla films directed by Gareth Edwards. The shooting took implemented in the fall of 2015, the film will be released in the summer of 2016. The story is set in Japan and present in this new Godzilla film produced by Toho, the first after a break of 12 years, will be high 108 meters, much higher than that appeared in Gareth Edwards films.