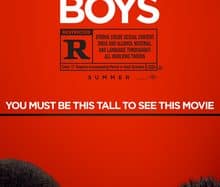 After being invited to his first kissing party, twelve-year-old Max is in a panic because he doesn’t even know how to kiss. Eager to make suggestions, Max and friends Thor and Lucas decide to use Max’s father’s drone to spy on a couple of teenagers. But things take a wrong turn and the drone is destroyed. Max and his friends jump school then and leave for an odyssey in which every moment goes from bad to worse. They must be able to replace the drone before the father returns home.

“The middle school had nothing sentimental about it, it was simply horrible. I think they are for all the hardest years. With Eisenberg we talked at length about our experiences back then, and above all about embarrassment and confusion: we knew it was a nice “place” in which a play could come to life. Many comedies are born from embarrassment, and in that period of life teenagers know very few things but still try to share them with each other. I am in a kind of cusp, at a time when everyone is changing … Seen this way, adolescence can also be a very fun place to live … ”
Gene Stupnitsky
Produced by scriptwriter Lee Eisenberg, Seth Rogen and Evan Goldberg (still together after Suxbad – 3 minds over the hair, 2007, Strafumati, 2008, and Sausage Party – Secret life of a sausage, 2016) and by James Weaver, producer of the series of films Bad Neighbors, Good Boys marks the arrival of the typical teenage comedy that came to Rogen at a big Hollywood studio like Universal Pictures.
It is no coincidence, therefore, that even before leaving and debuting last March at the South-by-Southwest American festival, the film had already been talked about, as well as by an accusation of veiled racism for having darkened with the the face of the stand-up of the African-American actor Keith L. Williams, also and above all for a series of restrictions and censorships on which the same trailer then found a way to make fun of.