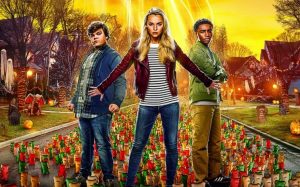 Sonny and his friend Sam have been entrusted to the surveillance of Sonny’s older sister, Sarah, but they cleverly elude her to devote themselves to their extra-school project: to empty cellars and attics with the name “brothers Cassonetto”. And it is in a house to be emptied that they find an old trunk containing an old book. Freed from prison, the wicked ventriloquist Slappy returns to materialize. Touchy and vindictive, he will animate the worst intentions of all the creatures on display in the courtyards and houses of the city on Halloween, passing to Sarah, Sonny and Sam the most adventurous night of their lives.
With some delay on the announced times and with a handover in directing and screenplay, comes the second film in the series dedicated to the successful series of books for young readers signed R. L. Stine.
The setting is new, dropped in the imaginary town of Wardenclyffe, built around the Tesla tower (actually demolished in 1917) and therefore perfect for hosting “electrifying” events, and the trio of protagonists is new, but there are also different welcome confirmations, ranging from the tendency of the creatures of the novels of Stine to come to life and combine disasters, to the figure of the author himself, with his ill-concealed envy towards King, to a narrative and filmic formula, which doses entertainment and art of the fright in a brilliant and effective way.
The occasion of the preparations and the Halloween party, in this second chapter, lends the side to a more elaborate visual exhibition and the film by Ari Sandel knows how to collect the occasion and gives several moments of small great show, as the attack of the gummy bears, the resurrection of costumes and toys of the hardware, and the transformation of the garden of the crazy neighbor of the boys’ house, Mr. Chow, in a cemetery of horrors, complete with an original gigantic spider.