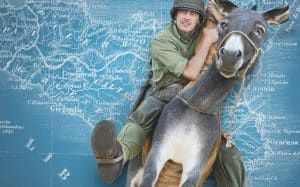 In guerra per amore

New York, 1943. Arturo Giammarresi, Palermo transplanted in America, dreams of marrying the lovely conterranea Flora, but she is already promised to Carmel, son of the right arm of Lucky Luciano. The only way to get the Flora hand is to ask it directly to the woman’s father, he remained in Sicily. And since the Allies are going to land in Trinacria Arturo he enlisted in the US Army and arrived in the village where Crisafulli command, in no particular order, the Madonna, the Duce, the local boss Don Calo and a handful of fascist. The Arturo destinies will cross with those of the inhabitants of Crisafulli and above all an army lieutenant Yankees, the Italian-American Philip Chiamparino, went to war for the sake of his country and has a high sense of honor.
After the success of the mafia kills only in the summer, Pierfrancesco Diliberto, in Pif art, back behind the camera with a history written with Michele Astori and Marco Martani, trying to replicate the successful format of the previous film: a comedy that hides a indignant vision of the Italian reality, past and present, with particular attention to the excessive power of the mafia in Sicily. The starting point this time is good: tell the Allied landings in southern Italy as a turning point for the fate not only of World War II but also the spread of sprawling Cosa Nostra.
The problem is that, for the first three quarters of its length, in the war for love does not find the original figure of Pif, that humor surreal and politically incorrect with which the director-writer recounted the crimes of the Mafia in Palermo through the point views of the child protagonist, and instead creates a cinematic pastiche of life is beautiful and Baaria, through Hair and Forrest Gump (already declared inspiration of the mafia kills only in the summer).
The packaging is taken care of and there’s a great attention to the environment reconstructions, lights, costumes, photography, special effects: which would be entirely positive, and it is certainly an indication of a genuine desire for artistic growth. But the Pif author is lost in a number of other references and in an attempt to create an exportable product, giving rise to countless clichés about Sicily during the war: who knows what would you say to the National Italian American Foundation, which for years has been fighting against ‘ stereotyped image of Italians and Italian-Americans in film.
In the war for love she is dedicated to Ettore Scola, this commendable initiative, but counter-productive as invites the viewer to compare the elegant and subtle writing of a great master of Italian cinema, able to create characters in the round and painful situations and profound truth, with that of this movie, which is also far from that measured and sagacious of the mafia kills only in the summer. The final report, based on a very important historical document, arrives late and is expressed in courtly tones, highlighted by a musical score (by Santi Santos) that gives no respite to the public throughout the narrative and stifles those silences that should be equally important of words, especially in a film set in Sicily. Is a desire to start from the bottom and back through the history of war in love with each inserting more modesty hub, more anger, and more attention to the real.
What however remains extraordinary is the cast of Sicilian characteristics, consistently above the material at their disposal: in particular Sergio Vespertino and Maurizio Bologna in the shoes of Saro and Mimmo, Maurizio Marchetti those of Don Calo, and in the role of Lorenzo Patané ‘hateful Carmel.