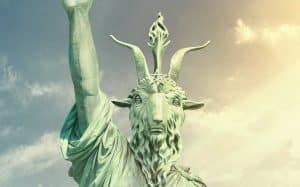 Apparently, this is an organized group of worshippers of Satan, who made parents throw children’s games Dungeons & Dragons and play records in the 1980s to expose hidden messages.
But we will quickly see that any religious component of their existence is overcome by an ideological mission. They are mainly related to the separate preservation of the church and the state. It is not easy in a country where borders have been porous for centuries and where evangelical wings, which appeared in the 1950s in response to the Cold War spectrum of communism, have managed to introduce religion into public life.
The Satanic Temple is best known for intervening where Christian groups try to use public funds to praise Christianity or integrate religious text or iconography into public spaces.
Over time, Satan is treated more like a rhetorical device than a dark deity, with a life force that can be struck by incarnations or magic, like in a horror movie.