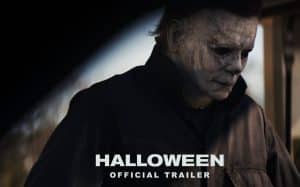 For 40 years Laurie Strode is preparing for the return of Michael Myers, the psychopath who slaughtered his friends during the night of Halloween 1978. And all those years Laurie remained closed at home, imposing the same prison also to his daughter Karen , with the intent to protect it from the inevitable reappearance of the monster. When Myers is transferred from the Smith’s Grove psychiatric hospital, Laurie’s fears turn out to be well founded: the prisoner finds a way to escape and of course goes to Haddonfield in search of the only prey escaped in ’78.
40 years have passed since the first Halloween, the one written and directed by John Carpenter: in the middle some bad copies whose existence this last sequel basically tries to ignore.
It’s as if there really was nothing between the original film and the one with which David Gordon Green, with the executive production and creative advice of Carpenter and the support of Blumhouse Productions, tries to restart the threads of the story of Laurie and Michael. Because Green explicitly chooses to frame this chapter as a perverse love story between two individuals – a man and a woman – united by an indissoluble bond, and therefore hostage to each other. This choice leads the director to move away from the horror genre in its most classical sense and to approach the (apple) drama of the author: so less “scary” scenes, less creative and original ways to tear the next one apart, and less irony seasoned with references to pop culture.
The choice to make Halloween an author’s film also affects the characterization of the characters: among the predestined victims there are the usual petulant, horny and vicious kids, but also a psychoanalyst who has absorbed the obsession of his most famous patient and two British journalists used to making audiences about the misfortunes of others.
Green is also applauding the contemporary trend that the women of the big screen must prove stronger and more cunning than men. Jamie Lee Curtis, also an executive producer, resumes the role of Laurie Strode making her a feminist icon intent on transmitting her strength (and her incazzatura) to her daughter and nephew, or two generations of women after her, and it does not matter her obsession has made her an “unsuitable” agoraphobic and tormented mother: Laurie is still a model of resilience and rejection of the role of victim. In comparison, Michael Myers is a vintage psychopath who still wanders around with a kitchen knife, and who in comparison to certain contemporary monsters really looks like a masked party figure.