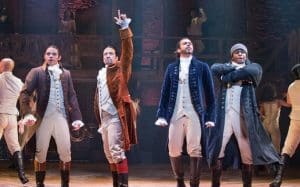 It is 1776. Alexander Hamilton, an orphan and a lieutenant, arrives in New York animated by a devouring ambition and a great desire for personal redemption. He comes across Aaron Burr, an orphan like him, but managed to educate himself and make his way, and Burr becomes a mentor but also a potential future rival. On the contrary, the group of friends Hamilton meets – including the Marquis of Lafayette and the abolitionist John Laurens – are as hungry for freedom and assertion as he is, and are preparing to fight a revolution that will change the course of history: the war of independence. settlers against the United Kingdom ruled by King George III, intending to keep the rebels under the heel of the crown. Alexander Hamilton will become one of the founding fathers of the United States, and he will meet Eliza, from a rich and good-natured family, who will become his wife: but his soul mate will remain Angelica, Eliza’s older sister.
Hamilton, a Broadway box office champion, is screened (based on Ron Chernow’s essay of the same name) and played by Lin-Manuela Miranda, a phenomenon of American entertainment who also composed all the music and lyrics for this Pulitzer Prize-winning musical for drama. , as well as an avalanche of Tony, the Oscars of the Yankee stage.
Hamilton is a pure genius, starting with the intuition of entrusting almost all roles to African or Latin American performers (like Miranda himself): the very fact that they are “black or brown performers to tell the story of the origins of the United States” makes the difference, because it sheds a whole new light on rather well-known historical events overseas.
All the more reason Hamilton could not be confined to the stage tables by excluding those minorities who cannot afford the cost of a ticket to the most popular Broadway show. Thomas Kail, the director of the theatrical show (as well as director of the miniseries Fosse / Verdon), decided in 2016 to record performances of the musical with the original cast and then turn it into a rap and hip hop cinematic experience that loses nothing of the stage energy. The texts detail important historical documents and a series of real events, but are told with the slang and rhythm of contemporaneity.
Kail is careful to maintain that rhythm through editing cuts and shots that alternate soliloquies in the foreground with dances, duels (which become rap duels) with love scenes. The lights and scenery of the original musical are further emphasized by the film direction, and the cast of the cast, each more attentive to passing the ball than to being at the center of the scene (including Miranda), contributes to the fluidity and speed of the film. ‘insieme.