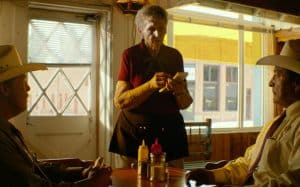 Get Texas Midlands agencies off, just small pieces, just out of the box, early in the morning when there are no customers. Clean up the money at the Casino. Pay debts, extinguish the mortgage, and leave the ranch where he has just discovered the oil to his two children, to stop a family history of too long lasting poverty. This is Toby’s plan, for which he needs his little brother, Tanner, who has just been released, after ten years in prison. The banks took that little he had and now he has to take it back, possibly without shedding blood. Two unknowns: Tanner, who is a hot head, and a Texas ranger at a retirement age, who as a detective knows his job better than everyone else.
British David Mackenzie “comes out” from the jail of his previous movie, “Starred Up”, with the urge for a bribe. Texas, with its rude and bloodthirsty, often sarcastic geographic and humorous landscape, offers the backdrop for a contemporary Western reoccurring roles and a history of emotional deserts and drilling deep into the heart of affections.
The intentions are good, though not surprising, but the film goes off in motion, dragging for a long time, undecided if playing the thriller card or that of the psychological portrait or even of the lyrical and modern Western. The soundtrack speaks then instead of directing, but is intrusive, chatting: it has little to do with the comic lexicon or with the cowboys.
The screenplay, signed by the author of Sicario, speaks of a different but not least inhumane violence: that of capital, of its traps, of its educated but unremarkable threats. And he speaks of men: different, but near, the two brothers; All the same, but far away, Toby and the Ranger. There is a line dividing them, that of legality, and no chance that one of them can pass the other side. Chris Pine in the shoes of the first and Jeff Bridges in those of the second, find two roles that cling to them with a brush, and dress them the best. Mackenzie does not make them meet up to the final, but joins them with the mounting tool. When he puts them face-to-face, armed, inside the duel mirror form, he packs a great ending without raising the sordina. If what went on it had the same mold, we would have seen a better movie.