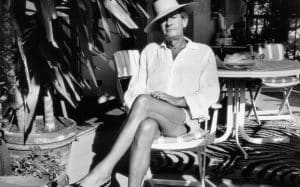 Helmut Newton-The Bad and the Beautiful

The life and artistic expression of photographer Helmut Newton is told through the testimonies of actresses and models who got to know him and work with this artist whose work was both an object of admiration but also of contestation.
In a very recent interview Carla Bruni, after having affirmed that “the politically boring has also replaced the politically correct”, to the interviewer who affirms that the nudes of Helmut Newton would not be allowed today, replies: “To think that his women are so powerful. Helmut never asked for anything on set, we wanted to be part of his vision, we trusted him. ”
This last verbal form “we trusted” can be considered the synthesis of this interesting documentary (from which Bruni is absent) whose director (who had already shot Helmut Newton. Mein Leben in 2002), as well as the subject of his research, puts women at the center of the goal. In fact, it is they (including spouse) who tell it more than he himself does in interviews or during shooting.
A portrait emerges very far from the accusations that rained down on him on several occasions, summarized in those of Alice Schwarzer in 1993 in the magazine “Emma” who accused him of sexism, racism and fascism. An accusation that for the Berlin Jew born in 1920 was definitely offensive. What emerges from the statements of women, of which not even for a second one can doubt that they are or have been willing to bow to a male will, such as Isabella Rossellini, Charlotte Rampling or Grace Jones (just to name a few) is a complex personality ( also a little perverse says Jones) but never bent on bullying or abusing women who agreed to pose for her lens.
If anything, what emerges is a desire to provoke that has its roots in a totally personal gaze capable of going on several occasions even ‘beyond’ the will of the client to affirm its own identity, an aesthetic brand that is absolutely recognizable but never repetitive. The prejudice against him is thus denied, with arguments that dig deep into his aesthetic choices, precisely by those who should have felt offended. The photographer is thus ‘photographed’ from a multiplicity of female points of view that help us to focus on him, restoring an image that goes beyond the superficiality of judgments sometimes unable to go beyond the first impression.