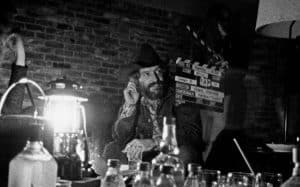 The reconstruction of a long interview that Orson Welles made with Dennis Hopper while he was shooting The Last Movie (1971) in Mexico, his cursed film destined to become a colossal commercial failure. The conversation between the two, which originally lasted 6 hours, was reduced to less than two with the help of Oscar-winning editor Bob Murawski, and constitutes a historical document of exceptional interest.