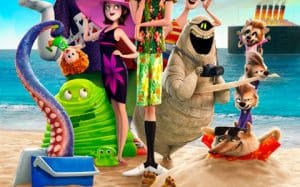 Drac does not dare to admit it to anyone, let alone with the light of his eyes, his daughter Mavis, but dreams of a new encounter with a woman, after so many centuries of widowhood. Seeing him stressed without realizing the real reason, Mavis involves him in a luxurious family vacation, strictly all monsters (plus Johnny), on a huge cruise ship. The cynical Drac does not jump for joy: there is nothing that his hotel on the mainland has to envy to that presumptuous transatlantic. Or maybe yes. Because the captain of the ship, the human Ericka, hit him in the heart. Is it possible that Drac did “zing”?
It starts from a rewriting of the original thesis – the idea that the zing happens once in a lifetime – this third chapter, bubbling like the foam of the sea in which it is immersed.
This time Drac is the absolute protagonist, but Mavis is never too far, only a step back, because the figure of the series is right in their bond, exaggerated and trouble engine, but always in the end or because of (too) good. All around, a community of monsters always growing (like the puppies of the couple of werewolves) in quantity and variety, which, far from being contour or context, are actually the limbs, tails, antennas and tentacles of the creature Hotel Transylvania: the space in which Tartakovsky gives vent to his purest talent as a crazy illustrator. It would take some still images at every shot to appreciate the composition and the inventiveness, the colors, the expressions; because, like a skilled DJ, Tartakovsky mixes the ingredients to extract an original and recognizable visual landscape.
Scanned by three stages – the underwater volcano, the deserted island and the lost city of Atlantis -, and anticipated by an air flight entrusted to a company of Gremlins that alone is worth the price of admission to the hall, the cruise on “love” boat “on which they travel Drac and family is really a journey on the ship of love, for all creatures, and a hymn to their crossings, which make the world richer and more amazing. The only really disgusting being, the real monster of the film, is Ericka’s great-grandfather: human no longer human, preserved by force (the force of hatred) inside a steampunk-style copper lung. He really shivers. The rest of the film releases only “good vibrations” and in the final fireworks fires.