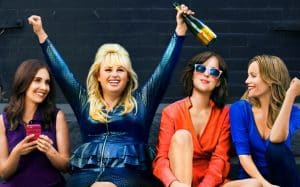 How To Be Single

Alice arrives in New York and decided to break up with Josh to explore the single life and learn more about herself. His friendship with Robin and the proximity of Meg’s sister, both single indefatigable, seem to direct it in the right direction, but soon Alice, instead satisfy his way, it ends up caving in to a variety of complications with relationships.
Delight of many and the cross of many, the romcom is one of the encoded film genres, conservative and impervious to the change in circulation. But even the most hardened among its detractors can not deny to the genre a unique ability to capture the spirit of the time – expressed through characters and curious actors – and create catchy intended to re-emerge in the most unexpected places, including living well. Each romcom wants a vehicular use “practical” message or may be presumed to have one, the idea of ​​a new trend that deserves to be immortalized, a moral to be conveyed in disguise. As the wording of the impossibility of a true friendship between man and woman in When Harry Met Sally, or reading of the signs of fate in Serendipity. Even The truth is that he likes you has not tried enough to contaminate and partly rewrite the glossary of romantic relationships.
Among the elements that most lack Single but not too prominent a role it right at the inaction of a strong basic assumption. Only the character of Alice seems embark on a growth path, that of (self) be convinced of being single to find out what this really means. But the screenplay by Abby Kohn, Marc Silverstein and Dana Fox, veterans of the genre, it seems more undecided the player on the right direction to take. If Johnson is applied, trying to join the role of avoiding stereotypes, its partners and especially its actors – essential role of every self-respecting romcom – disappoint, including a Leslie Mann who has lost the street corrosive humor universe Apatow and Rebel Wilson, who looks more like a Borat in a skirt than a millennial version of Samantha in Sex and the City. For handwriting paternity reasons – the novel from which singles but not too much is taken is Liz Tuccillo, writer of the famous series – and the clear (and declared in a dialogue) influence on the subject, Sex and the City remains the touchstone obliged the Ditter film. But if the transition from small to big screen of the original format had proved complicated, its adaptation to a new generation even more creaks.
The only alleged element of novelty seems tied to the enumeration of a set of unwritten rules of the perfect single (after eleven bottles of beer two opposite sex friends must necessarily have sex), highlighted by rowdy graphical overlays; an expedient already seen (Scott Pilgrim vs. the World) and already become a habit. And if from the beginning the fateful encounter between the individual maturation process of Alice and the inevitable trip / conversion / climbing (with even more inevitable voice over) the protagonist seems averted, it is instead just a simple extension. Before coming to this expedient of disarming obviousness, the script leads Alice through the skyscrapers of New York, as if to browse the topoi related to myriads of previous romcom. As if seeking an invocation to the muses who prefer to flaunt deafness.