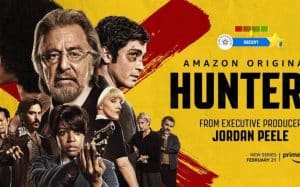 Jonah is a Jewish boy in New York in 1977, he is a nerd and tries to bring home some money by selling grass, but his inexperience immediately puts him in trouble with an anti-Semitic bully. The real tragedy that upsets his life, however, is the murder of his grandmother, because he witnessed the fact in secret and does not forgive himself for not intervening. The woman’s rich friend, Meyer Offerman, offers him the chance to regain control and take revenge and ends up introducing him to his gang of Nazi hunters. Jonah and Meyer’s team will soon discover that a conspiracy is underway to build the Fourth Reich in America.
Produced by Jordan Peele and written and created by the Hebrew author David Weil, the series winks at Tarantino’s cinema, between Inglourious Basterds and Grindhouse – Death Proof, but it does not lack a strong ethical perspective.
The numerous tales about superheroes among friends are only the beginning of a reflection on revenge and justice that crosses Hunters, where the theme at times seems to pass in cavalry in the face of hyperviolence, and then forcefully return to the center of the story. Jonah in fact takes time to embrace the team’s ways, she can’t kill and often wonders what her grandmother would have wanted, but Meyer Offerman’s charisma slowly seems to convert him to the cause. Roxy Jones, who in the eyes of Jonah appears as a hero of the blaxploitaion, soon finds herself in a melee with a Nazi and comes out traumatized by the clash. Even the most easy to kill characters like the Asian Joe Torrance and the English nun sister Harriet, appear disturbed or disturbing and not just to laugh about it.
Although initially, in line with Jonah’s naivety, revenge on the Nazis looks like a fun inglorious Bastard-style outing, it soon becomes a traumatic matter and an insoluble ethical ruin. Murray and Mindy Markowitz will live it in particular, who throughout their lives have dreamed of being able to take revenge on a man but when they find him as a prisoner they no longer know what to do with it. Also emblematic is the confrontation between Offerman and the real Nazi hunter Simon Wiesenthal, played by Judd Hirsch, who believes in the need to bring war criminals to justice in order not to go down to their level. Perhaps this is the real big test that the Jews must pass, he suggests, and the series ends up giving him reason in one of the last twists.
On the other hand, even the gang’s methods find their justifications in the face of a hyperbolic plot that the American government, conniving with the presence of Nazis on its territory, is completely unable to stop. In the passages that describe the Paperclip operation, which brought the Nazis to America, or the ample opportunities they had at NASA and the spread of anti-Semitism and racism among American whites, Jordan Peele’s influence clearly emerges. The tone is often bitterly ironic, with faux-promotional curtains and other over the top gimmicks, like an imaginary quiz about the reasons for hating Jews, but there are several passages that tell facts that really happened. In this it is useful to see the series by taking a look from time to time in the X-Ray interface of Prime video, in its English version, where various trivia are displayed that inform about what are the real events and which are the fictitious ones and what these are last are to mean.