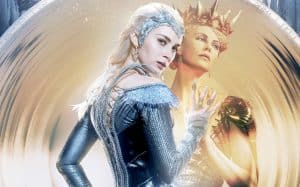 Ravenna, the wicked stepmother of Snow White, used to kill husbands in order to usurp the reigns, has a history of vile murders even among his blood ties. When the magic mirror reveals, in fact, that the daughter of his sister Freya is bound to spodestarla in beauty, Ravenna does not hesitate to end his fledgling life. Such is the Freya pain that awakens the dormant woman in art of black magic and transforms it into an ice queen, determined to banish the love of his kingdom. It is to this end, to be trained as warriors and forbid them love, Freya kidnap the children of its territories and grow them as hunters; and this is also the fate of Eric and Sarah, who, when they grow up, however, the love they do not know and do not want to give up.
Compared to Rupert Sanders film, Snow White and the Huntsman, this is half and half prequel spin-off: a close relative, but unrelated, just enough to accept that Snow White is not part of the cast but could return to face in beauty film stars Chris Hemsworth and Charlize Theron. The third point of the triangle is occupied by two female figures, handled by Emily Blunt, and Jessica Chastain, and only their skills of interpreters saves two absurd positions, for different reasons. The ice queen of Blunt, autoconfinatasi in a cold building, is such a blatant cloning is key dark-fantasy of the character of Elsa in Frozen, by touching the diplomatic incident. Altogether different, Chastain appears all but came to a forest and martial character like Sara, and can not prevent a reaction initially disoriented in the viewer, but is able to make plausible in a short time.
As for the movie itself, even Cedric Nicolas-Troyan opt for a variety of sources and models taken from contemporary cinema much more than a fairy-tale repertory: the company of the four dwarves, the meeting with the goblins, the quest of the mirror, to take covered for not into low and homicidal temptations, look no half terms to the trip with and for Tolkien’s ring and Jackson, while the context of the relationship between Eric and Sarah, child soldiers, can remember some moments of the Hunger Games saga . If you add the doubt that such a variety of models actually conceals a lack original material and a shaky need to exist in the film itself beyond the mere function of star container aforementioned reference to the prologue of Frozen, not late to appear.