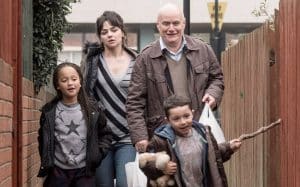 Newcastle. Daniel Blake is on the threshold of sixty years and, after working all your life, now for the first time needs, following a heart attack, the assistance of the State. In fact, the doctors who follow him certify a deficit that prevents him to have stable employment. It then requested the recognition of invalidity with its aid, but this is rejected. Meanwhile Daniel has met a young woman, Daisy, mother of two children who, without work, had to accept the offer of a small apartment but having to leave London and so are in an environment and an unknown city. Between the two snaps mutual solidarity but it must come to terms with the political choices that have nothing to share.
It’s nice to see that the filmmakers are contradictory. It had happened a few years ago with Ermanno Olmi that, presenting Centochiodi, had declared that he would not shot more than fiction. Fortunately for us he has already made the other two. The same happens now for Ken Loach who seemed, in turn, turned to documentary and instead gives us a movie of those that only he can offer us. Load that is a deeply human look and at the same time with the characteristics of the plea which asks us to rebel against what appears to one untouchable status quo. To do that is returned, along with the trust Paul Laverty, to document, in his hometown, Nuneaton, in which participates in the work of supporting those who are in difficulty.
From the title returns to the overriding need not to cancel individual identity strength of those who are returning to take on the social class characteristics of the dispossessed in 800 as Dickensian. Personal names have marked some of his most important films (Carla’s Song, My Name is Joe, Looking for Eric and the previous Jimmy’s Hall). Why is the dignity of the person that you want to cancel due to a system dominated by the ” cuts in social expenditure, and where the same officials who must apply them realize the cruelty (that’s the right term) of the rules that must be applied .
Daniel and Daisy know the sense of solidarity and do not intend to dissolve the fault of those who deliberately lost any trace. The more intimately touching scene, in a film that provokes emotion without using any artifice, takes place not by chance in a Food Bank. It is those realities that once would have been charitable defined and that today take the place that it should be up to a state worthy of the name, with all the insecurity that comes from volunteering. It is not necessary to go to Newcastle being just pass early in the day before the Association of distribution points including the laity as, for example, Daily Bread in Milan to see long lines of people waiting to be able to receive food rations. The number of those who are not immigrants is increasing daily. So in this free world Ken Loach continues to propose to the lives of ordinary people with the strength of one who describes it participates actively in the pain of those who suffered one of the deepest humiliation (the loss or inability of the work). Daniel, Daisy and her two children are added to the gallery of people whose Loach showed us a slice of life with the strength and the sensitivity of those who have no intention of surrendering to the logic of the savage liberalism.