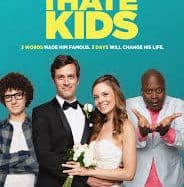 “I Hate Kids” is a comedy about Nick’s (Tom Everett Scott), who doesn’t want to be a father, but he discovers unexpectedly that he has a teenage son (Julian Feder) .
Nick Pearson, after so many years as a ‘single’, finally finds love. When he misses the wedding a little he discovers he has a thirteen-year-old son. Nick can’t stand kids and would like to send him back to his biological mother. But the trouble is that nobody knows who he is.