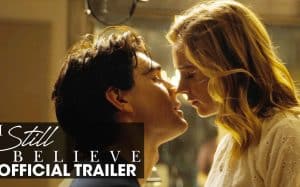 For a few years now, the surprising and fertile world of American Christian rock has been joined by a vast film production where the Erwin Brothers (A song for my father) are the standard bearers. Their new production, Cosa le mi mi di te, original title I Still Believe, tells the sad and romantic story of Jeremy Camp and his first wife Melissa Lynn Henning-Camp who passed away at the age of 21, when he was 23, for a tumor.
Still Believe is not only the original title of the film but also the first song written by Jeremy Camp after the death of his wife Melissa. The artist’s message is precisely strongly linked to the Catholic religion and with his song he wants to reiterate that despite the painful mourning he has not lost faith.
The film Cosa mi mi di te comes out in theaters on March 19 and was directed by Andrew and Jon Erwin. While the screenplay is by Jon alone along with Jon Gunn and Madeline Carrol. The story tells of the wedding of Jeremy Camp with Melissa, then of the beautiful honeymoon (immortalized by the song Walk by faith) and the discovery that the incurable evil that plagued the girl had returned even more implacable. A disease that will take her away a few months after the wedding.
To tell this dramatic story, a super cast led by the New Zealand actor and musician KJ Apa who many will also recognize in Italy because he is engaged in the Riverdale series in the role of the main character and the fiery red hair, Archie Andrews. At his side he fell into the shoes of his young wife Britt Robertson, another face known to lovers of American seriality since she was the star of Life Unexpected playing Lux Cassidy while in The Secret Circle is Cassie Blake. But it is in the secondary parts that we find the real surprises. Gary Sinise, in fact, that in addition to being a great actor (Forrest Gump, the spin off series CSI: NY among the many titles) is in turn an excellent musician (bassist of the Lt. Dan Band) is Terry Camp Jeremy’s father . While for the role of the mother Shania Twain was called the famous country singer of Canadian origins with some excursions in the cinema (Trading Paint) and also known in Italy for the hit “That Don’t Impress Me Much”.