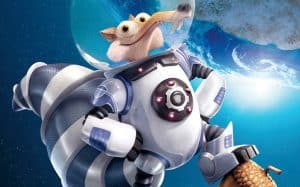 Epic and perpetual pursuit of the elusive acorn, Scrat finds himself pulled into deep space where proceeds accidentally to the planets of the solar system and causes hand against his huge threat to the Earth. A giant asteroid is headed on the planet and nothing seems to stop his run. Against the cosmic and fatal danger, Sid, Diego and Manny look for a solution and found Buck, ferret intrepid and eccentric who knows how to avert the impending apocalypse. Struggling with family problems just as explosive, the three historic companions solve their conflicts on earth as in heaven, providing once again a peaceful life with their loved ones, to prey and predators.
Fourteen years ago we watch Scrat chasing his elusive acorn and the viewing experience remains intact. After accidentally caused the melting of glaciers, global warming, continental drift and volcanic eruption, in this round of Scrat saga goes to infinity and beyond. unconscious detonator of an apocalypse meteoritic destined to hit the Earth and our old friends, Scrat perseveres stubborn, gnawing at the edge and advancing along faults of the Ice Age franchise.
Sisyphus and rodent gnawed by possession, the Blue Sky threat squirrel permanently to the prehistory in the history slip. Its strength, devoid of reason or self-preservation, is not that a pure momentum toward the object of desire, an acorn that Scrat wants most of all, wants for himself and away from danger. But his ambition is regularly frustrated by the condition of prehistoric life, where nothing is secure and stable. If Sid, Manny and Diego make sure the friendship and cooperation with the survival and the will to elude extinction, Scrat is a maverick ‘beat’ this time by artificial gravity.
Fifth round of an endless saga that is repeated without ever innovate, if not enlarging the family and the bestiary, Ice Age: a collision course again Scrat finds its reason for being, the stubborn interlude of a saga that now proceeds for accumulation and not to variation. From the first episode in 2002 a teeming crowd of comic sidekicks, colorful antagonists, girlfriends rouged and brats querulous has gathered around the original trio. And it is on this assembly that the prestigious studio has staked everything. So at the heart of this new venture is the daughter of Manny, (in) decided to leave mom and dad to embark on life together with a mammoth rapper and naïve.
Despite its size, the subject is thin, chopped and packed by a rowdy bunch of secondary critters that bridges the creative poverty with old gag. What a mess the ranks Jurassic arrivals an asteroid, an ice age or a T. Rex, the authors of the Blue Sky have already taken to the ideas ‘drawing’ the same refrain ad libitum. Nevertheless, if you surprise and lack originality, value endures in the eyes bulging Scrat that reflects a peculiar galaxies and cosmology. And if the Big Bang was a burst of laughter, and the idea of ​​God the missed encounter between a squirrel and an acorn? Ice Age: a collision course then sings the epic of Scrat somewhere deep in the universe. Responsible, totally irresponsible, is the cause of all that ails the prehistoric era, is the absolute secondary character or destiny whose actions determine the re-actions of the heroes, engaged again to save the world. Halfway between caricature and the allegory, the creature of Peter de Sève hides it behind the absurd obstinacy the ongoing efforts to continue.
The short that precedes the film (Cosmic Scrat-tastrophe) then reveals the metaphysical grandeur of Scrat. Figure of perseverance, and perseverance is committed to exist in spite of everything, teaches us to transform our limitations into new horizons. After all perseverance is the origin of the world, Scrat and every desire impossible.